Searching For Jedi’s and God

“If I find in myself desires which nothing in this world can satisfy, the only logical explanation is that I was made for another world.” -C.S. Lewis

If you find in yourself desires which nothing in this world can satisfy… then maybe there are some definite parallels to our life and the latest Star Wars movie.

If you haven’t seen it…then my question is why not?!   I must admit that despite being a part of the epic movie franchise all my life (I was five years old when the first Star Wars came out in 1977), I had no idea why I was drawn to the story so much.  That is until only recently when I ran across a recent NPR podcast that explained the whole “hero’s journey” concept.   Apparently all the great epic stories of old, and new, have a common theme that echo’s in the characters and structural concepts of the tale.

The question that I have is namely a “chicken or the egg” concept question:  So is the hero’s journey template in Star Wars and other stories something we WANT to believe is true about life or is it instead a deep understanding of the fabric of life struggles and how our TRUE HEART finds redemption in it?

To explore this idea, I want to take you to a piece written by one of my favorite writers.  He casts light not only on the insights gleamed from “Force Awakens” but he tells of the most epic of all ancient Christian monastic sites and the wild brave Christian Celtic men who occupied it. 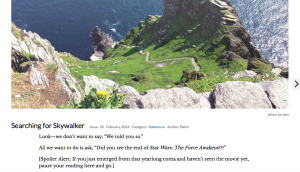 View all posts by toddclifton

What are you looking for?